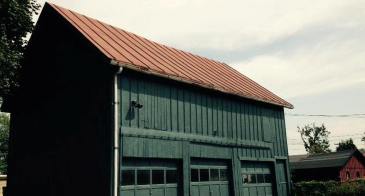 Behind our 1892 red brick house and back yard, we have a two story, three-bay building I have usually called the carriage house, and sometimes called the barn. There weren’t any stalls in it when we bought it, and it had a wide, red brick driveway under the concrete one. The bricks extend from the street to all the way across the front of the three big doors, then on out under the fence and under the vegetable garden. A long, strong metal rail runs across the front where large doors once hung and slid. The wide doorways on the front–now filled in with overhead garage doors hung slightly off-line from each other, and a set of tall, original, hinged, double doors facing the alley on the back, indicated to me that horse-drawn vehicles came and went on all that brick in the 1890s, rather than farm animals, on this corner in the city.

The outside of the carriage house has always been a well-weathered gray–both the exposed wood and the remnants of paint left on them. I liked how it looked. But decade after decade of weathering takes a toll on wood, and we finally decided it had to be painted. It’s the custom in our neighborhood to paint the wooden outbuildings red to match the big old brick houses; but it was easy to see that our carriage house had never been red. So I brought home paint swatches until I matched the remnants of the original paint, and bought that dark, slate gray for the carriage house. The color was called “Silent Night.”  I liked the color and its name.

The painters finished the job yesterday.  As I watched their progress, first scraping down to bare wood, then brushing on the tinted light gray primer, then painting on the Silent Night, I was soon alarmed to notice that all the sides of the building were not the same color.  I double checked the paint cans, then I went back to the paint store with a just-taken photo, and pointed out that while the west-facing wall virtually always in full shadow was exactly the color I had chosen–the deep slate gray, the east and south sides appeared to be a color that could only be described as blue–and quite an assertive blue!  The paint man wasn’t a bit surprised.  He said that grays ALWAYS tend toward either blue or green in bright sunlight.  Obviously Silent Night tends toward blue!

One  neighbor who only sees the south and east sides from her house told me she liked the color of the light gray primer better than the dark blue paint. Another on the east and south side told me she did not like that blue on the barn–her garage was red, like everyone else’s. Me?  I love the Silent Night. 🙂 The color is perfect for that building in that context:  It’s the color it’s always been.  And I’m guessing that in all the years since 1892 in which there was much paint on that building, the four sides of our carriage house have always appeared to be completely different colors, depending on the direction they faced, whether it was sunny or not, and if there was shade from that overhanging maple tree on the west side.

I think there’s a good chance that I appear to be different when viewed from different sides, too.  It doesn’t mean that I am, it just means that observers have different vantage points: Some see primer, some see gray in the shade, and in the sunshine, some see bright blue. I’m not necessarily changing–their contexts are.  My job isn’t to work at appearing to be the same on all sides all the time, or convincing others that I am, in spite of appearances.  My job is to be true to the integrity of who I am.  I need to be just as content if that’s a nice, rich gray that sort of melts in to the surroundings sometimes, as I would be if it were a just-like-everyone-else red, or an intense bright blue that shouts, “I’m different, and I’m here!” Silent Night. Yep. I can live with that. What do you think?

2 thoughts on “CONTEXT: Blue in the Eye of the Beholder”